Real screaming coming out of my mouth.

1) This is brand new. FINALLY. This is not a direct to video animated feature. It’s part of the DCCU, being released as a full length motion picture. A film about VILLAINS. And not just any villains, DC villains. (“The worst of the worst.”) I STILL can’t believe Viola Davis is Amanda Waller. Dreams really DO come true.

2) “Maybe Superman was some kind of beacon for them to creep back from the shadows” Further proof that these films are tied together. Whatever happens in Superman v. Batman affects this film and visa versa.

3) Amanda Waller. Amanda is not necessarily good– in fact she could be classified as more of a does bad things for HER greater good kinda gal. She’s a complex woman who understands the need for a Justice League but is also brutal enough to create another Batman. Amanda is the perfect example of a well written female character. ALSO VIOLA DAVIS.

“I want to assemble a task force of the most dangerous people on the planet. Maybe they can do some good.

“Exactly. And if anything goes wrong we blame them, we have built in deniability.”

“What makes you think you can control them?”

4) Harley Quinn. This is no damn damsel. Also the reference to her costume via her tattoos!

A second example of a well written female. It’s obvious from the trailer that both Waller and Harley are going to get a lot of screen time.

Holy shitake mushrooms. If that face doesn’t give you nightmares, nothing will.

Already he’s made the Joker his own. He sounds like a normal guy, it’s obvious he’s not trying to hide with neon green hair. It’s a brilliant reimagining of a modern day joker and it works so well.

I got nothing. I really don’t. I’m dying to see this movie.

It doesn’t look like the Joker is the reason for Harley’s incarceration. She’s a gymnast/acrobat, there’s a hint that she is also already unhinged. I’m curious as to why she’s not only imprisoned but imprisoned with the worst of the worst. What could she have done? Also, what could Katana have done?? 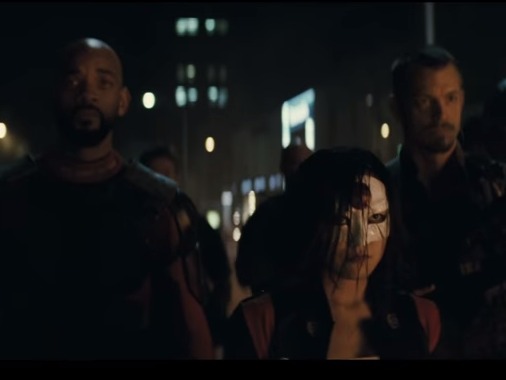 Does Amanda blackmail her? Is she there as Amanda’s fail safe? ALSO WILL SMITH!