DO NOT, I REPEAT, DO NOT, LISTEN TO CRITICS ON THIS ONE, PLEASE. I beg of you to go out and just see it yourself. There is a horrific bias going around on nearly every review I’ve seen, I can’t even get through some of them. It’s obvious this movie was made for geeks, not necessarily film buffs and I think that’s what’s annoying all these “critics”. It’s completely unfair that this film is being compared to the last eight years of the Marvel cinematic universe, which let’s be honest, the only golden child they ever produced being The Winter Soldier (fight me on this) and maybe the original Iron Man.

BvS is based loosely on Frank Miller’s The Dark Knight Returns. For example:

It’s not a complete retelling of the graphic novel WHICH IS FINE BY ME. This blogger is not a Frank Miller fan because his blatant dislike of Superman “allows” him to write Supes as a one dimensional boy scout which is infuriating (whether he’s “joking” or not, he wrote the damn story and now fanboys are all over it). I could go on and on about this but that’s a separate post all in itself…

This film did an even better job at hinting at the extended universe than any Marvel film. The idea of other “meta-humans” being out there, is on Bruce’s mind even though he’s dealing with this Superman thing. It comes up at the beginning with Lex’s file and his sharing of it with Diana, Bruce has that “vision” of the Flash, and at the end, he tells Diana that they must find these meta-humans. It wasn’t just a scene at the end of the credits, or a blink and you’ll miss it cameo, it was ingrained in the film itself and promised that great things are coming. They managed to do that and keep the film centered on Batman and Superman.

Something that really tickled my fancy was that Chris Terrio and David Goyer brought up Martha (Kent and Wayne) as a really important factor in both these men’s lives, because it is. Bruce’s mother was killed in front of his eyes, it’s something still very potent and real in even this aging Batman’s mind. Bruce is on his fourth Robin in this comic. 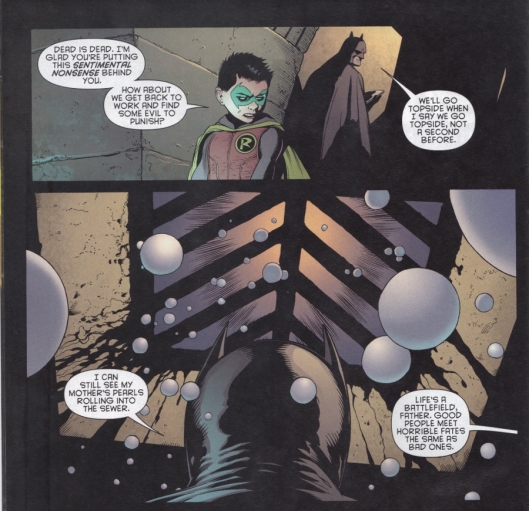 It’s also canon that Bruce visits crime alley (where his parents were murdered) every year.

Like the killing of Uncle Ben with Spider-man, some moments drive a character. This murder laid the groundwork for Bruce’s entire adult life and the creation of the Batman. The word Martha triggers something deep and personal in Bruce.

In the film, Clark goes to his mother for advice. Even if you haven’t seen Man of Steel, you can easily assume that Clark, this alien who probably grew up struggling with his powers, being different, being lonely, would have a wonderful relationship with his adoptive mother. She is his link to the human world. You could argue that Lois is too but Martha raised him, despite the fact that he was different, even dangerous. 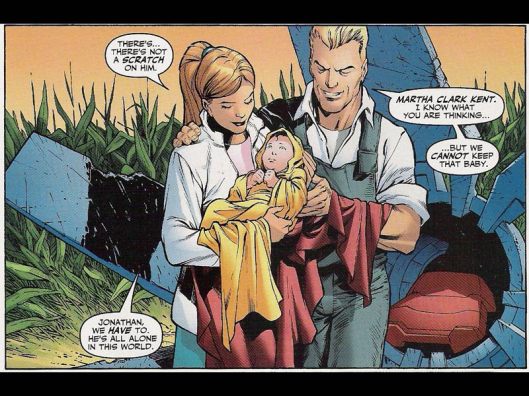 So there was something truly terrible and frightening in Lex having kidnapped her (that LOOK in Cavill’s eyes was incredible).

When Bruce is about to kill Clark, he gasped out Martha’s name. Clark is trying to appeal to Bruce’s mercy (I’m being BLACKMAILED help me!) while Bruce is figuratively bitch-smacked with that name (How could he know? How could he know about her?? HOW??) and as this wonderful blogger noted, Bruce realizes Clark is not a monster, he’s not so detached that he has no feeling. He has a human mother. The whole basis of this “war” is that Superman is a god, he’s untouchable, out of mortal reach and especially, control. And in this moment, Bruce realizes he can trust him because of his desire to rescue this mortal woman, his Earth mother. It’s spectacular.

Gal Gadot is breathtaking and owns that final battle (Though what was with that blast coming out of her bracelets?) who DIDN’T wanna see her cut doomsday in half?! They threw the lasso in there, hell yeah, her costume looks great, more dialogue would have been great but she’s getting her own film and no doubt subsequent cameos in future films SO THAT’S SOMETHING!

I L O V E D this film, I truly did. I was worried they’d rush the introduction of all these new characters but instead we got really exciting glimpses into what we will eventually be seeing. I grew up watching Batman The Animated Series and therefore Kevin Conroy is and always will be my Batman. But Ben Affleck did perfectly in portraying what we in the batcave are referring to as Daddy!bat (aka older, father figure Bruce. Stop with those dirty thoughts, internet). Keaton, Clooney, Kilmer and Bale really don’t come close.